Greetings by the President of Souiki-kai

I am Makoto Akizuki, appointed as the president of Souiki-kai at this moment. I finished my doctor’s course in the Department of Environment Systems in 2012, and now serve as a teacher of that same department. I will continue to work hard for further development of Souiki-kai after 2 years from the Souiki-kai meeting in October 2018. Best regards.

This year is a momentous year for both the graduate course and its reunion “Souiki-kai” due to the 20th anniversary of The Graduate School of Frontier Sciences and the 10th anniversary of Souiki-kai. Together with the support of members and the graduate course, we have promoted numerous inventive attempts by Hiroyuki Matsuura, the former president, to contribute to the promotion of interaction between alumni and current students, support for the school life of current students, and further development of the graduate course. It is my responsibility to keep reforming these reunions and to build a framework which can last for over 10 years, due to my appointment as president in this year of change. I believe it is an important task to think about a system which includes our international student members who account for 20% of alumni and current students actively participating in reunion activities.

Incidentally, what I felt at the 10th commemorative meeting of establishment of Souiki-kai is that the people who gathered at the meeting had no sense of homogeneity (in a good way), so I felt that this is a place of new encounters and discovery. I think that this is an aim of the president of the Graduate School of Frontier Sciences, where students who have various backgrounds gather for integrated studies and the alumni who received that education thereby gain various experiences. I do research on chemical reactions in the unique field of supercritical water. In this field of high temperature and high pressure, water and oil are mixed with each other to create interesting phenomenons. A little bit different from this story, there is also an encounter that occurs here at Souiki-kai, and I expect this place to create some interesting results.

Although, Souiki-kai is still a young and growing reunion, it is necessary for members to participate actively in order to develop new networks. Please continue to give us support and encouragement. 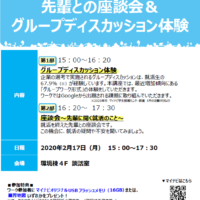